OUFTI-1, the satellite created by students in Liège, will be launched by the doyenne of rockets – Soyuz – from the Kourou base (in French Guiana) on 22 April 2016 at 23:02 (Belgian time). A satellite of CubeSat type, it will serve as a relay in space for amateur-radio (“ham”) operators using the worldwide D-STAR digital telecommunication system.

The idea for the Liège CubeSat was born on Tuesday 18 September 2007 during a telephone conversation between Luc Halbach, an amateur-radio operator and engineer at Spacebel, and Professor Jacques G. Verly of the Faculty of Applied Sciences (School of Engineering) of the University of Liège (Department of Electrical Engineering and Computer Science or “Institut Montefiore” – Laboratory for Signal and Image Exploitation), also a ham-radio operator. They were soon joined by Professor Gaëtan Kerschen (Department of Aerospace and Mechanical Engineering). At that time, ham-radio operators were beginning to use a sophisticated technology for digital telecommunications known as D-STAR, but the worldwide D-STAR system did not yet have a relay satellite, a very useful device when there are no terrestrial relays or they have been destroyed, e.g. during natural catastrophes. Providing such a relay is one of the missions of OUFTI-1! 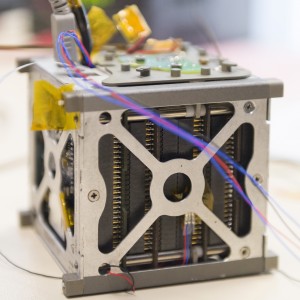 CubeSats are nanosatellites, the concept of which was developed at the start of the 2000s by Stanford University, California, in collaboration with California State Polytechnic University (“Cal Poly”); their basic structure is a cube with sides of 10 cm, their weight is limited to around 1 kg, and their available power is on the order of 1 watt. Above all, they are designed, built, and tested, not by large space agencies such as ESA and NASA, or by flagship companies of the space industry, but most often by students. 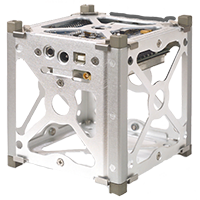 Named OUFTI (Orbital Utility For Telecommunication Innovations) in 2008 at the suggestions of Prof. Verly in reference to a colorful expression of Liège indicating both surprise and admiration (i.e. “waow”), Liège’s CubeSat was designed from the beginning as a formidable pedagogical tool, bringing together students from from the University of Liège (ULg) and higher education institutions of the Province of Liège. In its 8 and one half years of existence – and it’s not the end yet! – the project has enjoyed the involvement of dozens of students and has inspired no less than 45 master theses. The different components of the satellite were designed and then assembled by the students before being subjected to rigorous tests, at the Centre spatial de Liège (CSL) of the University of Liège and at the European Space Research and Technology Center (ESTEC) of the European Space Agency (ESA), which both also provided significant advice. The day-to-day management of the project was ensured, first by Amandine Denis (Department of Aerospace and Mechanical Engineering), from the early days of the project until the end of June 2014, and then by Xavier Werner (Institut Montefiore) to this day. Sébastien De Dijcker (Institut Montefiore) and Valéry Broun (HEPL) also played key roles, in particular in the completion of the ground and space segments of the OUFTI-1 system.

The Liège satellite will be placed in an elliptical orbit, inclined at 98°, at an altitude of between 450 and 660 km. It should have a life duration of around 2 years.

In addition to its pedagogical role, it will fulfill 2 missions.

The first is to serve as a space relay for amateur-radio operators using D-STAR. This is a digital technology developed in 2001 by the Japanese Amateur Radio League, making it possible to transmit voice and data digitally and simultaneously. These communications can be conducted, not only by radio, but also via the Internet, one of the remarkable advantages of the D-STAR. Such communications are evidently only possible if the ham operators are close to a relay or connected to the web, which is not necessarily the case in areas that are difficult to access or that are isolated following a natural catastrophe for example. Hence the usefulness of a satellite that is efficient and inexpensive and that can relay critical communications. To fulfill this role, OUFTI-1 contains a relay – fully homemade – that had to be miniaturized and adapted to the extreme conditions of space, the two main challenges of the project.

To become familiar with D-STAR technology and in preparation for the radio-communications with the satellite, the ULg quickly installed – as soon as 2008 – the first Belgian terrestrial repeater (connected to the Internet) of the worldwide D-STAR system, operational first at Institut Montefiore and then at the Central Command Post of the ULg. 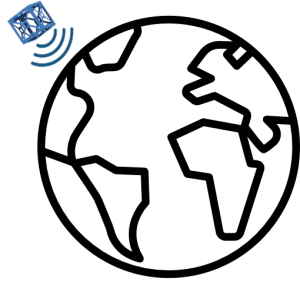 The student have built not only a satellite, but also two complete satellite ground stations, located at Institut Montefiore and at the Central Command Post, closely linked to the terrestrial D-STAR repeater.

The second mission is to test the behavior of the solar cells of the satellite, very peculiar cells because they have a higher yield than our usual photovoltaic cells (30% as opposed to the usual 15%).