The year 2015 has been a crucial year for the people displaced as a result of environmental changes: in March, the Sendai Framework for Disaster Risk Reduction acknowledged the need to address displacements. In October, 109 States adopted the Protection Agenda of the Nansen Initiative, which seeks to better protect the rights of those displaced across borders by disasters. Two months later at COP21, the Paris Agreement instituted a taskforce to address migration and displacements related to climate change.

Though significant breakthrough was made on the front of climate policy in 2015 with the Paris Agreement, it has not materialized into an actual, meaningful reduction of greenhouse gas emissions, and every month that goes by seems to break yet another heat record. Meanwhile, the humanitarian crisis at the borders of Europe seems to deepen every day, with no solution in sight

Thus the year 2016 represents a test of reality. In the last decade, progress has been made with regard to the understanding of the interactions between environmental changes and migration flows and the agenda setting of these issues. But knowledge gaps remain significant, with regard to the quantitative assessments of migration flows, the impacts on communities of origin and of destination, to the theoretical framing of the phenomenon, to name just a few of these gaps.

Despite scientific progress, actual policy results have been slow to deliver. We are now on the verge of the creation of new structures and institutions: a task force within the Loss & Damage Mechanism of UNFCCC, or the new Platform on Disaster Displacement. Held just before the opening of COP22 in Marrakech, the conference will seek to bring together the research and policy communities on both environmental changes and migration flows to assess progress and challenges ahead.

The conference is named after the late Graeme Hugo (1946-2015), formidable scholar in migration studies and a pioneer in the examination of the linkages between environmental changes and migration. The event will also mark the launch of two initiatives to foster research on these subjects:

The conference is organised within the framework of the EDGE project, funded through the Horizon 2020 programme for Research and Innovation of the European Union. It seeks to bring together scholars and practitioners from social sciences and environmental sciences, as these two scholarly constituencies often remain too clustered from each other on these issues. It will also seek to move beyond debates on the environmental causality of migration to examine the multiple interactions between the environment, migration and politics. We welcome submissions that cover different aspects of these interactions, from theories and models (of both migration and environmental changes) to policy processes, including empirical and critical studies from both natural and social sciences. Topics include, but are not limited to: social dimensions of vulnerability; Immobility and trapped populations; land issues (land grabs, land holdings, lease, etc.); borders and security; disasters and evacuations; environmental and climate data for the study of migration; climate science, models and tipping points; legal and policy perspectives.

Key highlights of the conference 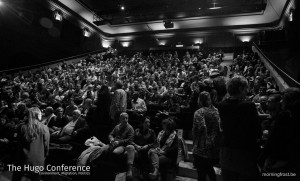 Pictures of the Hugo Conference